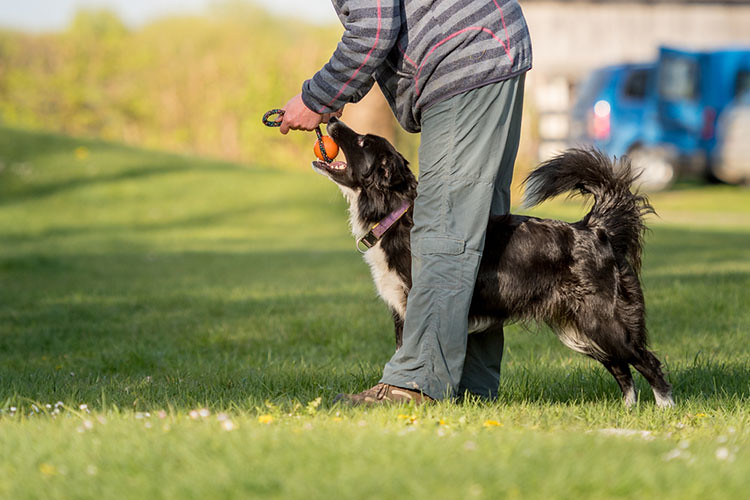 Dog obedience training invariably involves the owner/trainer giving a command in order to get a response from the dog being trained.

Some rules when using ‘commands’

Always try to get your dog to respond to a single command or two at the most. There is no point repeating the same commands over and over. This is confusing and only succeeds in training the dog to ignore commands.

When your dog fails to respond to the first command, repeat it as you gently put him into the correct position. Not repeating a third, fourth or subsequent command shows that you are in charge. Praise with a firm but the light voice; always avoiding the loud ‘bad dog’ voice.

Stand in front of your dog with a food reward in one hand. Begin with your hand in front of the dog’s head but low down. Then, as you move your hand up and over its head in an arc, and with the dog keeping an eye on the food moving overhead, give the command to ‘Sit’.

At the same time, use your spare hand to tap gently on the dog’s hindquarters, which should encourage the dog to sit.

Wait a few seconds with your dog in the Sit position, and the food still out of reach, before giving praise with ‘good dog’. Then reward your dog with the food.

From ‘Sit’ there is a natural progression to the ‘Stay’ command. After getting your dog into the Sit position, give the Stay command. The signal for this is the open hand, fingers upwards, facing your dog and pushed towards its head as in a ‘stop’ motion. As you make this signal, firmly say ‘Stay’.

Using the ‘Down’ Command

This command, which requires your dog to ‘lay down’, begins in the Sit position. Have food in one hand and command ‘Down’. Then with your food hand close to its nose, move the hand in a downwards motion and along the ground for the distance, you can stretch your arm.

As your dog naturally follows the moving food, gently push down on the dog’s shoulders to encourage it to lay down as it reaches for the food.

First, put your dog on a lead and get him into the Stay position. Make it obvious to the dog you have food as a reward.

Firmly give the Come command. Then you slowly move backward and away from the dog for a short distance. As you move backward, you beckon the dog to come to you by moving your arms upwards from your waist and around in a circling motion.

Imagine you are beckoning someone to come to you. This is very similar, but use both arms, with food in one hand, and do it very deliberately.

Further, encourage the dog with a gentle tug on the lead. After your dog obeys the Come command, make it Sit, waiting a few seconds before rewarding with the food.

Progress with the Come command is achieved by using longer ropes, and then no ropes at bigger distances until your dog obeys at any distance.

For comprehensive details of the best dog obedience training programs available, click the various Reviews in the menu bar on the left.

The pillar of good dog training commands. But even though it looks simple, when the professional dog trainer is doing it, you might find it difficult. And the dog will probably not obey you. It is the tone of the voice that decides whether you succeed or not.

Dog training is no exception. To get to the level of obedience we demand from our dogs (ask any professional dog trainer) we train our dogs often. Can you imagine Michael Jordan ever telling his coach ” You know Phil, I am Michael Jordan"?