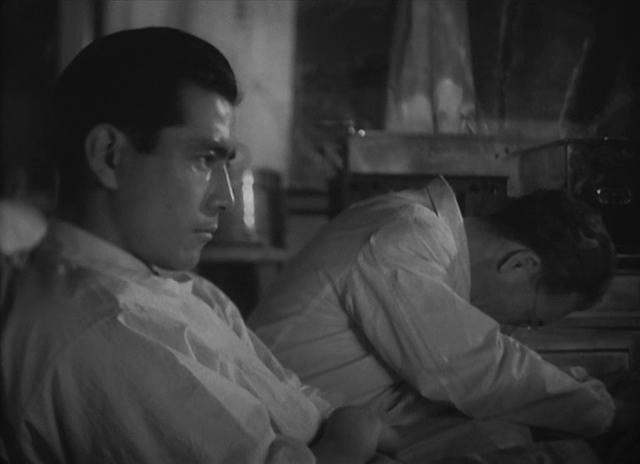 Normal readers to my reviews know if I can help it I don't want to know anything about a movie before I watch it. It's more fun that way and I think it's more fair to the makers of the film if I go into it completely blank. That said the only thing I knew about THE QUIET DUEL before I watched it was the cast/director and that Netflix didn't have it. When I picked up it free on itunes video store I did notice that it looked to be a medical thriller. Well, I was wrong. Just off that quick glance at the cover I build in my head that this was going to be a surgical room duel between two doctors with differing ideas on how the surgery was suppose to go or maybe they've been kidnapped and are now performing surgery on a yakuza boss or something.

None of that happened. Instead, we get Mifune as a surgeon who during the War cuts himself while working on a soldier and contracts syphilis. He has a fiancé back home who's been waiting for him for 6 years so when he returns from the War he breaks it off with her and keeps his secret from everybody. He returns to work at his fathers clinic then one day he runs into the guy who gave him the disease.

Of course other stuff happens, but I'm not going to give it all away. Overall it was a good film, but if it wasn't for the well-known cast and director the whole thing would just be forgotten. If you're new to Kurosawa this is not the film to begin with. Try YOJIMBO, STRAY DOG or HIGH AND LOW instead. THE QUIET DUEL (I have no clue what that title means) is for completists only.

Update: I just bought an excellent Kurosawa book "The Films of Akira Kurosawa" and it seems even Kurosawa agrees with my opinion: "When I remember this film, it seems to me that only the early scenes in the field hospital have any validity. This is because I didn't describe things too well in this picture. When the locale moved back to Japan, somehow the drama left the film."