Enough With The Violence-Against-Women Scenes In Contemporary Ballet! 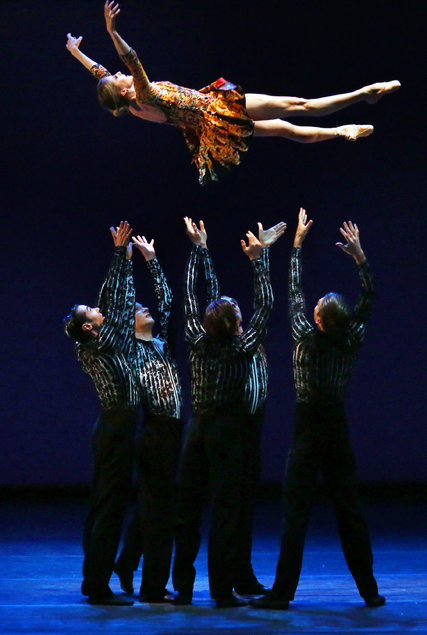 Sterling Hyltin, thrown into the air by male dancers in a scene of violence on the opening night of “Odessa,” at New York City Ballet.CreditAndrea Mohin/The New York Times

When the curtain went down on Alexei Ratmansky’s dense, complicated new work for New York City Ballet last weekend, the end of a long Sunday matinee, my friend and I turned to each other, not sure what to think.

“What was with the gang rape scene?” I said.

My friend shook his head, as unenthused as I was.

We both had been struck by it: a scene in which the ballerina Megan Fairchild (in a role originated by Sterling Hyltin), at the center of a group of five men, was aggressively thrown around against her character’s will — a scene that happened, and then was over, not explicitly addressed again. At one point, the petite and strong Ms. Fairchild, trapped, was catapulted into the air, flailing violently (and rather impressively) while airborne.

When her aggressors dispersed, she slapped her partner, Daniel Ulbricht, and he fell to the floor. Some people in the audience laughed. We didn’t. The retaliation, if that’s what it was, didn’t match the gravity of the assault.

In other words, we had seen a portrayal of a woman being physically violated, with essentially no consequences, no resolution, no critique of the men’s actions or of their unresolved nature. Sound familiar? Moreover, it was never less than beautiful to look at: controlled, virtuosic, glamorous.

Did everyone see it this way? No, and I’m not suggesting they should have. But I did, and the work, “Odessa,” which had had its premiere at the City Ballet gala a few nights before, left me feeling heavy, not offended so much as exhausted, as I tried to reconcile its flood of dazzling formal invention for a cast of 18 dancers (not unusual for Mr. Ratmansky) with its use of tired, troubling clichés (more surprising).

If such sleek, unexamined images of violence against women — this wasn’t the only one in “Odessa,” but to me the most prominent and inexplicable — weren’t so pervasive in contemporary ballet, I might have felt differently. But they are, and I’ve seen enough.