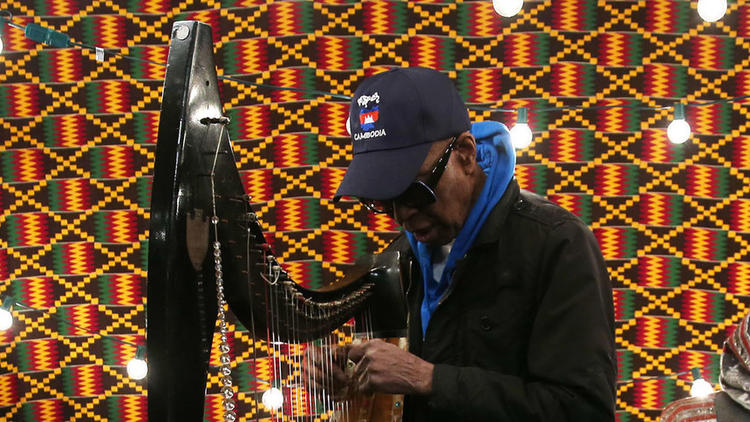 Kelan Phil Cohran is seen playing his harp on Thursday, Jan. 22, 2015, in an exhibit at the DuSable Museum of African American History in Chicago celebrating the 50th anniversary of the foundation of the AACM (Association for the Advancement of Creative Musicians).

The globally influential Association for the Advancement of Creative Musicians (AACM) was co-founded by him. And generations of musicians drew inspiration from the pioneering work of Chicago composer and multi-instrumentalist Kelan Phil Cohran. He died Wednesday at the University of Chicago Hospital at 90, said his son Tycho Cohran.

"He was a major contributor to the whole structure and the idea" of the AACM, said Muhal Richard Abrams, another co-founder of an organization that changed the course of music starting in 1965.

"I think he had a profound influence on many organized groups," added Abrams. "They more or less cut their teeth in Chicago, and their major influence was Phil Cohran."

Said Chicago percussionist-bandleader Kahil El'Zabar, who helped organize a 90th birthday tribute to Cohran on May 8 at St. Adalbert's Church on West 17th Street: "He was an innovative cultural institution unto himself."

That's not an exaggeration, considering that Cohran played and recorded with the groundbreaking Sun Ra Arkestra in the late 1950s; invented an instrument he dubbed the Frankiphone — a version of an African kalimba or "thumb piano," which White brought to Earth, Wind & Fire; created the Affro-Arts Theater, which in the 1960s was a South Side epicenter of experimental arts; and founded the Artistic Heritage Ensemble, which influenced bands as far-flung as El'Zabar's avant-garde Ethnic Heritage Ensemble and Earth, Wind & Fire.

"He was definitely one of my mentors at an early age," said Roscoe Mitchell, a founder of the pioneering Art Ensemble of Chicago, one of the first AACM bands to attain international acclaim. "I had nothing but respect for him as a musician and a teacher."

Indeed, the two roles were inseparable to Cohran, whose long career in music essentially linked early jazz traditions to its most contemporary off-shoots.

Born May 8, 1927, in Oxford, Miss., Cohran moved with his family to St. Louis when he was about 10, immersing himself in the city's robust jazz scene and playing alongside trumpeter Clark Terry in the late 1940s. Pianist-bandleader Jay McShann, who had given a young Charlie Parker his first major job, hired trumpeter Cohran and "that was where I really learned to swing," Cohran told DownBeat magazine in 1984. "The crowds would be so thick, people would be falling on top of you and drinking and everything; it got so bad you'd have to lean back and play."