Toning Down Asian Stereotypes to Make ‘The Nutcracker’ Fit the Times 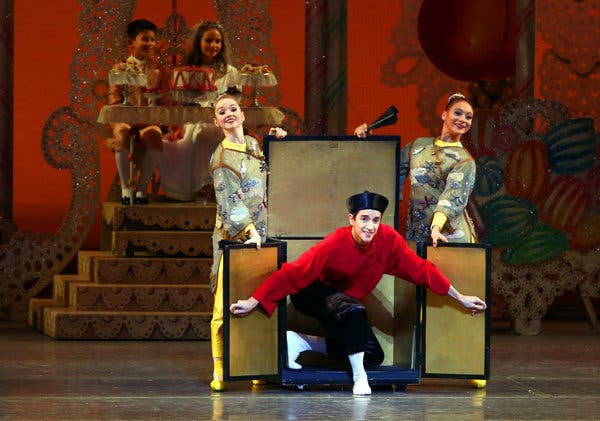 When Marie and her Prince visit the Land of Sweets in Act II of “George Balanchine’s The Nutcracker” — the New York City Ballet holiday tradition that begins its annual run at Lincoln Center on Nov. 23 — they encounter the Sugarplum Fairy and Candy Canes, as well as Hot Chocolate from Spain, Coffee from Arabia and Chinese Tea.

In an era of increasing sensitivity to cultural stereotypes, the Chinese Tea segment — with its pointy finger movements, rice-paddy hats and a Fu Manchu-type mustache for the male dancer — had begun to seem offensive to audiences, as well as to some members of City Ballet.

“I struggled internally with being cast in Tea as a person with Asian heritage,” said Georgina Pazcoguin, a City Ballet soloist who is part Filipino. Because it’s a featured role in a marquee ballet, Ms. Pazcoguin said she was excited to have the exposure but “never felt quite comfortable with the depiction of the culture.”

Last year, New York City Ballet modified the choreography, costumes and makeup. And, just last month, the Balanchine Trust, which owns the rights to Balanchine’s work, notified other ballet companies that the changes were an approved option, though not required.

“There is a different sensibility with regard to these issues, so we wanted to respond,” said Ellen Sorrin, the Trust’s director. “We are not demanding that companies do this; we’re making them aware that these are concerns.”