PARIS — Three years to the day after he lived through the worst terrorist attack in France’s modern history, Fred Dewilde and other survivors, neighbors and families of victims gathered on Tuesday for a subdued commemoration in the area of Paris hardest hit by the violence.

“We don’t really know each other, but we do understand each other and we’re here for one another,” said Mr. Dewilde, 51, who was at the Bataclan concert hall on Nov. 13, 2015, and attended the memorial held in a square nearby, where the crowd released balloons into the sky. “We’re all citizens of the 13th.”

For France, especially for the Paris area, the initial sense of horror gave way to an outpouring of grief, then public defiance. But enough time has passed that many of those who lived through the attacks — like Mr. Dewilde, a medical illustrator turned graphic novelist — have moved on to processing the trauma through writing, film and the arts. 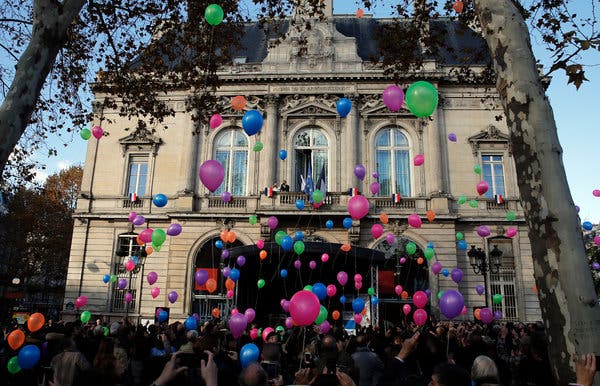 “It is the media, the history books, the artistic works, the graphic novels that circulate widely that are going to help in the construction of a collective memory,” said Denis Peschanski, a historian at the National Center for Scientific Research in France. He is a co-leader of a project that uses the events of Nov. 13 to study how the memory of trauma changes over time.

“Memory is a puzzle,” Mr. Peschanski said. After a traumatic event, whether people were in immediate danger or just watching on television, they instinctively want to “find the pieces of a puzzle,” he said.

Creative works are now filling in some of those gaps.

They are personal, but also trace aspects of the attacks that many people will recognize — a body of art that also serves as shared testimony. In addition to the therapeutic value they have for victims and witnesses, the artistic endeavors, many of them open to interpretation, can help others understand what they and their society are going through.