Content that ‘exaggerates dark side of society’ is banned from TV – from homosexuality to adultery, showing cleavage and even reincarnation. 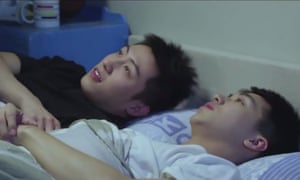 The Chinese government has banned all depictions of *** people on television, as part of a cultural crackdown on “vulgar, immoral and unhealthy content.

Chinese censors have released new regulations for content that “exaggerates the dark side of society” and now deem homosexuality, extramarital affairs, one night stands and underage relationships as illegal on screen.

Last week the Chinese government pulled a popular drama, Addicted, from being streamed on Chinese websites as it follows two men in *** relationships, causing uproar among the show’s millions of viewers.

The government said the show contravened the new guidelines, which state that “No television drama shall show abnormal sexual relationships and behaviours, such as incest, same-sex relationships, sexual perversion, sexual assault, sexual abuse, sexual violence, and so on.”

The clampdown follows an increase in cultural censorship in China since Xi Jinping came to power in November 2012. In December 2014, censors stopped a TV show, The Empress of China, from being broadcast because the actors showed too much cleavage. The show only returned to screens once the breasts had been blurred out.

In September 2015, a documentary about young *** Chinese called Mama Rainbow was taken down from all Chinese websites.

The new regulations have angered *** activists in China, who have fought for two decades to overcome the substantial stigma in their country against homosexuality. It was only decriminalised in 1997 and was only taken off the official list of mental illnesses in 2001.

In November, one Chinese campaigner took the government to court over its description of homosexuality as a “psychological disorder” in textbooks.