Come for the princesses and stay for the ... interpretive dance? Disneyland’s new parade ups the art ante

The draw of a Disney parade in the modern era has long been the floats. That’s true again for Magic Happens, Disneyland’s first new daytime cavalcade in almost a decade. Marvel at the mini forest that conceals Anna and Elsa of “Frozen” fame, and stand transfixed at the curved LED screen that represents a wave towering over Moana.

Yes, the floats of Magic Happens provide the requisite eye candy needed for a theme park parade. There are details large — a blinking, bronzed sorcerer’s hat with a slight Steampunk bent — and small, such as little robotic owl, his name is Archimedes, perched near Arthur and Merlin on an installation celebrating the under-represented classic “The Sword in the Stone.”

But for those who take in Magic Happens, here’s a tip: Divert your eyes from the recognizable characters and brand icons. The stars of Magic Happens are the dancers, significantly elevated from their traditional role revving up the crowd with upbeat moves between set pieces. The 90-or-so performers are graced with heavily theatrical choreography, which at times borders on interpretive dance. In turn, Magic Happens possesses a keen awareness of dance as a language. 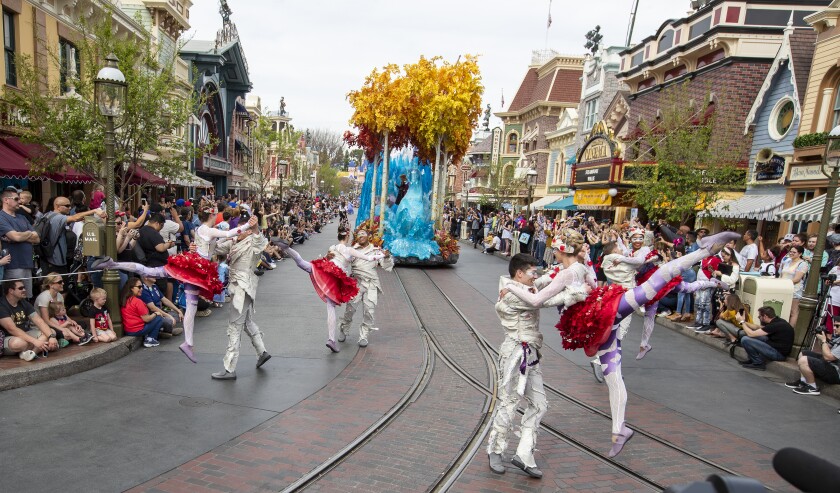 Dancers in front of a “Frozen 2" float bring a bit of ballet to Disneyland.
(Allen J. Schaben / Los Angeles Times)